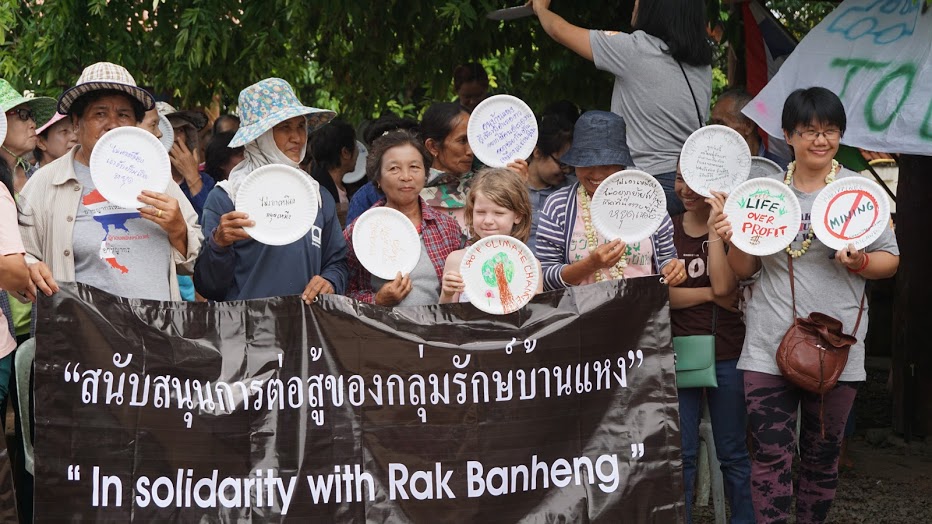 On June 9, 2016, APWLD (Asia Pacific Forum on Women, Law and Development), alongside the villagers and the community-based organization of Tambon Ban Haeng, Ngao District, Lampang held a Day of Solidarity. During the activity a community discussion took place, whereby the villagers and members of the Rak Ban Haeng Conservation Group shared their experiences in their struggle to resist a lignite mine in their area. Women Human Rights Defenders (WHRDs) from different countries who are working with APWLD also shared their own experiences. The discussion and sharing reflected the similarity in the experiences that women's human rights and environmental defenders are faced with, particularly in State- and corporate-sponsored aggression.

A symbolic action was also held whereby the participants of the activity were made to write on paper plates what their demands are in relation to the proposed activity. The people, standing together were wrapped in black cloth to signify that the proposed coal mining is a destructive project that will affect the rights to life, livelihood, and environment of the people.

The community members of Ban Haeng are steadfast in resisting the mining project and they continue to express their opposition despite the grant of the Minister of Industry of a mining concession. Human rights abuses, such as various forms of intimidation, including close physical surveillance by unidentified men, harassment from military officers, threats of death and enforced disappearance have been made to WHRDs, especially to the coordinator of the Conservation Group, Mrs. Waewrin Buangern.

The event was focused on showing solidarity with the women leaders and the villagers of Ban Haeng as they continue to call upon the government to demand that they be allowed to live in peace in the land they have lived in for generations and to craft their own development agenda. The people of Ban Haeng should not be deprived of their right to their lands in order to accommodate a project which has negative impacts on their livelihood, on the environment and on the climate.

APWLD will continue to work with the people of Ban Haeng in their efforts to protect the community's livelihoods, local environment, and community rights to participation in public affairs. We stand with the villagers in denouncing a development agenda that is beneficial only to the elite, causes irreversible damage on the environment and aggravate climate change. We call on the Thai Government and local authorities to revoke the concession permit granted to Green Yellow Co. Ltd., to withdraw all charges against community leaders and to work with the community to achieve Development Justice.